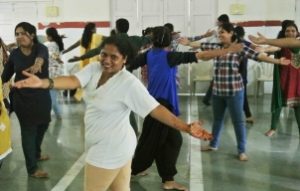 While completing doctoral studies on the spirituality of peace in Berkeley, California, in 2004, Prashant Olalekar SJ from Mumbai, was seeking for new avenues holistic spirituality that would enrich his ministry as a Jesuit. At the first session of an orientation retreat before the start of his course, Prashant was asked to choose a card suggesting the theme for his retreat.

Prashant was pleasantly surprised that the theme that came up for him was ‘God knows only four words: “Come dance with Me”’. This quotation from the Sufi poet Hafiz turned out to be not only the personal theme for his retreat but also a divine invitation to participate as a co-creator in the cosmic dance.

During his stay at Berkeley, Prashant was introduced to the InterPlay movement and later wrote an article that was published in the October 2014 edition of a UK Jesuit publication, The Way. Prashant is particularly interested in the way he sees InterPlay gradually emerging as a tool for building global partnerships and reaching out to the poor.

Prashant writes, "when it comes to any dialogue involving words the privileged are at an advantage because of their greater economic and educational resources. But on the level of the body there is a much better chance of establishing connection as equals: play is a way of levelling the unbalanced power relationship. InterPlay can be explored as an effective pedagogy for empowering the poor, whose most precious resource is their bodies."

"Through InterPlay one discovers that play and music, dance and drama are not the monopoly of privileged, elite performers but are the birthright of everyone who has been freely gifted with a body. The improvised songs and movements contrast starkly with the choreographed performances of Bollywood idols and Western pop stars. People of all ages and sizes, including those with various disabilities and illnesses, can benefit immensely from it."

"Like yoga, InterPlay aims at the integration of body, mind, heart and spirit, but it does not entail any intricate poses or intense discipline. Powerful, practical ideas and a system of simple activities rooted in movement, storytelling, song and stillness offer access to our own ‘body wisdom’—what works best for us, what kindles our own life passion and mission. A workshop could start with simple activities such as an easygoing warm up, followed by the InterPlay form called ‘Walk Stop Run’, which uses basic daily movements to prepare the body gradually to give greater expression to the energy locked up within."

The full article can be downloaded here