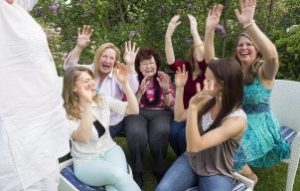 Reflections on Exformation by Trish Fairley. Exform... to shake, laugh, cry, whoop, to get what's inside, out!

We often talk of ‘exformation’ as the need to get rid of the’ yucky stuff’ or of an overload of information. Recently I’ve noticed how it’s the body that reacts first when it receives particular information, way before thoughts kick in to modify that initial response, whether that information is joyful or sad.

When we watch people receive news that they’ve won a prize, a competition or learn that they are pregnant they often scream, shake and cry or use a high voice to exclaim the same thing over and over, (‘Oh My God, Oh My God, Oh My God!’), often covering their face with their hands.

Immediately after I gave birth to our first child I shook uncontrollably, so much so that I couldn’t hold the cup of tea that I was given. It slopped everywhere!

Likewise when one hears of a sudden death of a beloved the body may drop to the floor, start shaking, screaming or sobbing. In other words, it knows what to do!

It should not be calmed until it’s ready to say ‘enough’ for the moment. After a road accident people will often shake violently; it’s helpful to encourage this and not try to reassure them that’s everything’s OK. When they do feel ‘safe’ again, after the initial shock, their body will stop exforming.

Often parents stop their children exforming way too soon, possibly through social embarrassment or the external messages/authority in our society. But if the child’s body is left to finish its exformation, it often jumps up and runs off as if nothing untoward has happened!

We know the brilliance of the InterPlay system that Cynthia Winton-Henry and Phil Porter have developed but did even they realize just how brilliant it is to have so much laughter as information?

When we play, using the forms, there is almost always a lot of laughter. Mind you some of us tend to laugh/exform at the ‘wrong’ time in the ‘wrong’ place. Many years ago Pete, our son Diarmid and I went white-water rafting in Bali. Suddenly a huge cascade swept Pete out of the raft and into the rushing water. In my terror I laughed hysterically, screaming ‘he might drown, he might drown’. Our son was horrified at my reaction!

Yawning, sighing and groaning are also the body’s natural way of letting out dis-stress and overload. Pete has noticed that he starts yawning the minute the leader starts the InterPlay Warm-up and how delicious his body finds that to do! And how often do we stretch and yawn in the mornings without thinking about it then flop on the sofa in the evenings, letting out a big sigh as we do so?

In the recent Women’s Singles Finals at the Australian Open, when Angelique Kerber realized she’d beaten Serena Williams her body collapsed to the ground and started sobbing before she ‘composed’ herself to get up and hug Serena.

Other disciplines have noticed the same phenomena using words like ‘vent’, ‘discharge’, ‘dump’, ‘spray’, ‘download’, ‘blurt’ although sometimes we’re so unaware that we’re doing it that we don’t negotiate its appropriateness at a given time or place. I notice that if I can exform first, then the need to tell others all about my ‘stuff’ diminishes remarkably.

So exformation is an example of the body’s natural wisdom and often a means by which we can release whatever we need to, before going on to play more deeply. In InterPlay I notice that if people don’t play frequently enough they have a big need to exform energetically before they can be present to themselves and the others in the group. Let’s encourage this!