A Brief Reflection on InterPlay in My Life 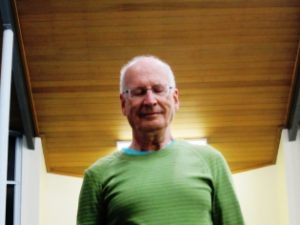 The discovery of InterPlay has been a journey of discovery which has led to healing, delight and joy (and some pain!)
At the beginning of 1996, I participated in a workshop offered by the Institute for Theology and the Arts. I had just completed six years as a parish minister, and wanted, no, NEEDED, to do something physical, so signed up to do the dance elective. It had been tough work in the parish, with a small group squelching the creative gifts I wanted to offer. Cynthia Winton-Henry and Phil Porter were the first of the keynote speakers, illustrating their talk with dance, including all kinds of movements and lifts.
My heart sang in response. However, in speaking with them over lunch, I discovered that it was all improvised! I almost turned tail and headed for home, but as an act of gritted-teeth commitment, I chose to stay, and take the risk of doing something frighteningly new. It wasn’t that I couldn’t dance, but that I was saturated in the discipline of well choreographed ballet steps!
Improvisation was utterly foreign to me…..

It didn’t take long for me to realise that improvisation was my true home.

One of the things we were invited to do that afternoon, was to lie on the floor, and allow one hand to dance. My initial reaction was, “Oh, that’s a bit twee, a bit Mickey Mouse, surely – anyone can do that….”
Less than 30 seconds into the dance, I felt tears in my eyes, and all the pain of having my creativity stifled in the parish was in my hand, and I was dancing it. From simple beginnings, and a trust in the process, deep healing flows. That healing continued at an 8 day intensive workshop for Spiritual Directors in Melbourne later that year. All the gifts, and more, were reborn, not so much for my sake, but for others’ healing and joy as well. It was as though I became a dancing birth-mother, as others wanted to find their own dances, and be released into new freedom. I found that InterPlay can be a powerful resource for both individual and one-to-one spiritual direction. When body / mind / spirit are able to co-operate together, to listen to each other, to understand that they are ONE unit, then awesome things can happen. Everything in me affirmed that this is LIFE!
Three or four years ago, my ophthalmologist told me at our first consultation, that my eyes were a mess due to diabetes retinopathy, and that if I did not begin a long course of laser surgery immediately, I would be blind, sooner rather than later. I totally freaked out, and sent emails to InterPlay colleagues, seeking support and prayers. Emails came back, assuring me of love and encouragement. Gradually the feeling came that I was being cradled in a hammock, woven with the loving thoughts and prayers of others, and I was able to rest in that.

In May 2007, I had quadruple heart artery bypass surgery – one of the Intensive Care nurses told my husband that I had a very peaceful body when I came from the operating room to ICU. Great hammock!

Over the years, I’ve discovered that I can dance sitting on a chair (with a broken bone in my foot) and in a hospital bed after surgery (not the most recent bout!) It’s all about exploring what you can do with what you’ve got at the time! A few years ago, we changed cars, and of course everything felt different, especially the clutch. (still a manual car) After a couple of weeks of kangaroo hopping, and trying to figure out why I couldn’t get it right, I thought about approaching it from an InterPlay perspective – letting what my body knows about learning stuff take over. In other words, let the clutch teach my body how to work it, and stop trying so hard! Worked well! Body wisdom in action! InterPlay has also taught me to be more relaxed and welcoming about people, and this has informed how I act as a Uniting Church minister. My sense of curiosity and wonder about diversity and working together has increased, and I find I can hang looser, letting people be themselves. It’s much less stressful to approach life and its issues with an easy, soft focus
(When Fibromyalgia is flaring, that’s more of a challenge, though!)

I love people’s willingness to share their gifts in the community, and love encouraging them.

It’s so good to create a place of trust, where people discover it’s OK to be vulnerable, and know they won’t be wounded. People need to know that they are valued, cherished, and respected, and that their lives are to be celebrated. My preaching style developed strong InterPlay tendencies, too. I have fun telling people I’m a “trained improviser”, when they tell me they love that I don’t use notes. I find that the better I know my material, the easier it is to use it without notes (Oh…..how obvious is that!!!). I’ve also used dance as a response to a Scripture reading, or led a exercise in “leading and following” as an example of sharing in community. InterPlay can be a powerful resource in a worship context! Other gifts have been celebrated and affirmed in the InterPlay group – writing, photography, and painting. With photography, I look at the world through the camera lens, aware of colour, texture, shape and composition. This has influenced my awareness in dance as well – I love both watching and participating in dances which involve shape and composition. And InterPlayers are not afraid to use colour!

My painting on silk is more relaxed, again involving shape and composition, and colours blending into one another. I love watching how each piece of work evolves.

In life, InterPlay encourages me to be more attentive to ordinary, everyday things, to be more present to what is going on, both within me and beyond. I am able to sense more options for living, all of which can be right and appropriate. One thing in particular I want to shout from some high place:
I learn and intuit things through my body. It has taken several decades to claim this, and to know and trust its rightness. Having had a fairly academic background most of my life, I had become used to the rationale that says only that which can be reasoned and empirically tested is valid. In other words, the mind is all that matters. Without fully understanding why, I found this somewhat devaluing, and belittling. I have often found that when something is right, I sense that with an almost physical thump in my gut. There’s a deep body recognition of “yes!” I firmly believe that this way of learning is just as valid as nutting something through. Of course both can work together, and that becomes a great combo! But now, I refuse to be put down because of the way I know stuff!
“YES!!!”