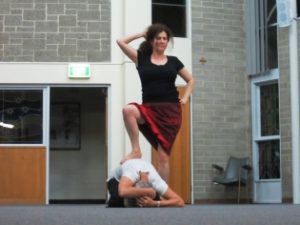 I stood looking into a concrete enclosure housing three echidnas. The enclosure looked small, the sand and dead trees fake. It all seemed like a depressing attempt to cage an animal in an ‘appealing’ manner. My kids always want to look at the echidnas, whenever we go to a zoo it’s the one exhibition they have to see.

Zoe and Oscar climbed as high onto the walls as they could and then flung themselves over - hanging half their body into the echidnas space, laughing, giggling, pointing. One of the smaller echidnas came trundling forward. In hunting mode, it ignored my children’s noise and all of our stares. There were ants to be had.

As the echidna advanced the ants scattered. Left, right and some straight ahead up the wall and out of the reach of that deadly snout. Good move I thought to myself. Surprisingly the echidna did not divert and chase the ants that scattered to the side. It made straight for the wall. Pushing its snout and head as close to the wall as possible it stared to climb. Those little side paddle paws scraped away at the concrete till this little hunting beast was standing parallel to the wall.

With her tummy up against the concrete barrier the echidna stretched its little snout and neck as far as it possibly could along the wall. She paddled one extra time, stretching even higher. She stood suspended in mid air standing on two feet for at least two tenths of a second…

Zoe, Oscar and I held our breath…

And then it fell…

Ka plonk. Straight backward onto its back. Looking too much like a turtle. Zoe, Oscar and I screamed with laughter.

The echidna kicked hard and turned herself over. “Well you don’t see that everyday now do you?” I laughingly stated to my kids. Movement from the echidna made us quiet down. She was on the advance again. She walked straight to that wall. She lifted her snout, bent her neck up and started to paddle. Up the wall she went again.

Zoe, Oscar and I were stunned into silence.

Paddle paddle paddle. She was upright again. One extra stretch, one extra paddle and she was standing on two legs AGAIN. One hundred, two hundred… BAM! She went straight backwards again. Zoe, Oscar and I stayed for 15 more minutes. She made two more attempts. She seamed to have a lot of gun. We experienced one of the best-shared memories of our lives.

I am an Australian born female with blood that is the colour of the world. My mother is a mixed blood born in El Salvador. Her mother is a native Pipil Indian. She learnt to speak Spanish as a young child but Nawat was her first language. She married a Palestinian man. You see when the fall of Palestine was imminent the boy that was to be my grandfather got onto a boat. There were eight boys from the one family all with their youngest uncle. All set sail with no firm destination other than freedom. They found land on the coast of Central America. The found freedom and forged opportunity love and life in El Salvador.

My father is also a mixed blood. He was born in Australia to a Scottish mother and a Portuguese father. Don’t ask me how that happened at the time!

I speak Spanish and English. When I was younger we faced a lot of racism. My brothers and I all have dark olive skin, dark eyes and dark hair. My mother and two older brothers have all been hospitalised from racial beatings. At a young age we started martial arts. As a result of that I now speak a fair bit of Japanese. I married a Chinese man and took lessons in Mandarin.

Is it any wonder that I went though a bit of an identity crisis!

So how do echidnas in a zoo and my confused sense of self-identity have anything to do with Interplay?

Interplay has encouraged me to move my body, to dance, sing, make music and play. Interplay forms allow me to move a concern or an issue out of the whirlpool of concern within my mind. I do not have to speak it to another. I can dance the delicate nature of balance for myself, on behalf of another, speak it in gibberish or simply watch it in someone else’s story/dance.

I had a tendency to take myself too seriously. I have now integrated play into my every day. Like the echidna – not everything has to be viewed as a trap!